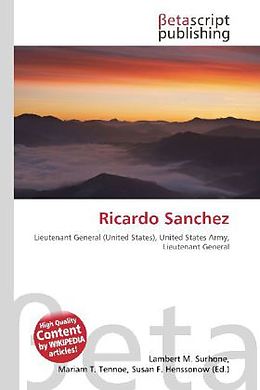 Please note that the content of this book primarily consists of articles available from Wikipedia or other free sources online. Lieutenant General Ricardo S. Sanchez (born September 9, 1953) is a retired United States Army general who served as the V Corps commander of coalition forces in Iraq from June 2003 to June 2004. He was the highest-ranking Hispanic in the United States Army when he retired on November 1, 2006. At the time of his retirement, Lieutenant General Sanchez called his career a casualty of the Abu Ghraib scandal. Sanchez was born into a poor Mexican American family in Rio Grande City, Texas. During the Vietnam conflict (1969 73), Sanchez was in college. He spent one year at the University of Texas at Austin on an ROTC scholarship, eventually transferring to Texas A&M University in Kingsville, Texas, where he graduated in 1973 with a double major in math and history. Sanchez was named a Distinguished Military Graduate (DMG), meaning he was in the top 10% of all ROTC cadets in the nation. He was commissioned as a second lieutenant in the Regular Army.