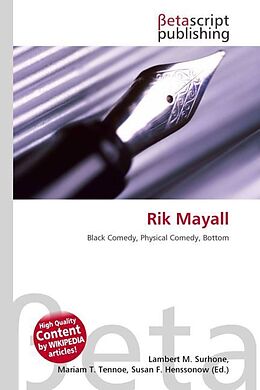 Please note that the content of this book primarily consists of articles available from Wikipedia or other free sources online. Richard Michael "Rik" Mayall (born 7 March 1958) is an English actor, writer and comedian. He is known for his comedy partnership with Adrian Edmondson, his over the top, energetic portrayal of characters, and for being one of the pioneering members of the alternative comedy scene in the early 1980s. Mayall was born in Harlow Essex to Gillian and John Mayall. When he was three years old, Mayall and his parents both of whom taught drama moved to Droitwich Spa, Worcestershire, where he spent the rest of his childhood and performed in his parents'' plays. After attending the King''s School, Worcester, he studied drama at the University of Manchester where he met his future partner and close friend Adrian Edmondson in 1976. He also met Ben Elton and Lise Mayer, with whom he would later write The Young Ones.