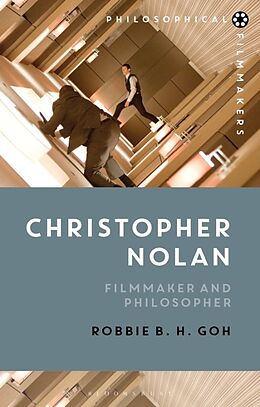 Vorwort
An examination of Christopher Nolan's films, exploring the philosophical ideas that underpin his representations of social discontent and privileging of appearance over reality.

Autorentext
Robbie Goh is Professor of Literature in the department of English Language and Literature at the National University of Singapore. His research interests are Diaspora Studies, Indian Anglophone Literature, Christianity in Asia, the Bible and Literature/Popular Culture, Late Nineteenth Century English Literature, and Speculative Fiction.

Zusammenfassung
Christopher Nolan is the writer and director of Hollywood blockbusters like The Dark Knight and The Dark Knight Rises, and also of arthouse films like Memento and Inception. Underlying his staggering commercial success however, is a darker sensibility that questions the veracity of human knowledge, the allure of appearance over reality and the latent disorder in contemporary society. This appreciation of the sinister owes a huge debt to philosophy and especially modern thinkers like Friedrich Nietzsche, Sigmund Freud and Jacques Derrida. Taking a thematic approach to Nolan's oeuvre, Robbie Goh examines how the director's postmodern inclinations manifest themselves in non-linearity, causal agnosticism, the threat of social anarchy and the frequent use of the mise en abyme, while running counter to these are narratives of heroism, moral responsibility and the dignity of human choice. For Goh, Nolan is a 'reluctant postmodernist'. His films reflect the cynicism of the modern world, but with their representation of heroic moral triumphs, they also resist it.