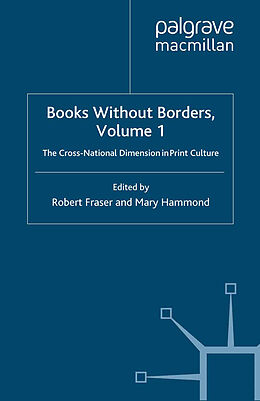 Where does the book belong? Does it enshrine the soul of a nation, or is it a means by which nations talk to one another, sharing ideas, technologies, texts? This book, the first in a two-volume set of original essays, responds to these questions with archive-based case studies of print culture in a number of countries around the world.

Inhalt
List of Figures List of Tables Acknowledgments Notes on Contributors Introduction; R.Fraser & M.Hammond Books Without Borders: The Transnational Turn in Book History; S.Shep Publishing Under the Yoke: A Short History of the Bulgarian Book from Paisy of Hilendar to Peyo Yavorov; M.Gibson 'After the Old; yet as agreeable... to the Newest': British and American Almanacs in the Era of American Independence; L.Santoro From Germany to Brazil: The History of the Fashion Magazine A Estação , an International Enterprise; A.C.Suriani da Silva School Readers in the Empire and the Creation of Postcolonial Taste; R.Fraser Origin and Growth of the White Fathers Press at Bukalasa, Uganda; I.Page A New Demand for Old Texts: Philippine Metrical Romances in the Early Twentieth Century; P.M.B.Jurilla Greene, Waugh, and the Lure of Travel; L.Prescott Africa Writes Back: Heinemann African Writers Series - A Publisher's Memoir; J.Currey Outside the Nation(al): 'South African' Print and Book Cultures and Global ' Text -scapes'; A.van der Vlies Shakespeare's Postcolonial Journey; R.Mooneeram Select Bibliography Index