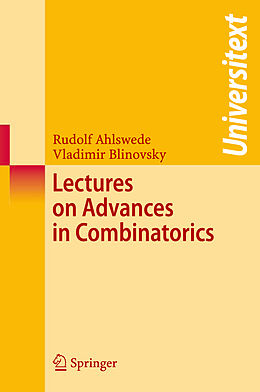 Lectures on Advances in Combinatorics

This volume features lectures that focus on basis extremal problems and inequalities--two sides of the same coin. Additionally, the lectures help prepare approaches and methods useful and applicable in a broader mathematical context.


The lectures concentrate on highlights in Combinatorial (ChaptersII and III) and Number Theoretical (ChapterIV) Extremal Theory, in particular on the solution of famous problems which were open for many decades. However, the organization of the lectures in six chapters does neither follow the historic developments nor the connections between ideas in several cases. With the speci?ed auxiliary results in ChapterI on Probability Theory, Graph Theory, etc., all chapters can be read and taught independently of one another. In addition to the 16 lectures organized in 6 chapters of the main part of the book, there is supplementary material for most of them in the Appendix. In parti- lar, there are applications and further exercises, research problems, conjectures, and even research programs. The following books and reports [B97], [ACDKPSWZ00], [A01], and [ABCABDM06], mostly of the authors, are frequently cited in this book, especially in the Appendix, and we therefore mark them by short labels as [B], [N], [E], and [G]. We emphasize that there are also Exercises in [B], a Problem Section with contributions by several authors on pages 10631105 of [G], which are often of a combinatorial nature, and Problems and Conjectures on pages 172173 of [E].

Written by specialists of the subject

High educational value because it presents some very impressive research results, that have not appeared - for the most part - in book form

Some theorems are of breathtaking depth and importance

Rudolf Ahlswede, Professor emeritus of Bielefeld University, has been engaged in research projects to advance a ''General Theory of Information Transfer'' since his retirement in 2003. He is one of the leading experts in combinatorics, number theory and information theory and has been awarded international prizes and honours, for instance a Honorary Doctorate of the Russian Academy of Sciences in 2001, the Humboldt-Japan Society Senior Scientist Award 1998/99, a Paul Erdös Monetary Award (with Levon Khachatrian) in 1996, the Claude-Elwood-Shannon-Award 2006 of the IEEE Information Theory Society. Since 2004 he has been a member of the European Academy of Sciences.

Vladimir Blinovsky has been based at the Institute for Information Transmission Problems of the Russian Academy of Sciences, Moscow since 1981. His scientific interests include combinatorics, coding theory, probability theory, large deviations, and information theory, subjects he has taught in Russia, France, the USA, and Germany.

The main focus of these lectures is basis extremal problems and inequalities two sides of the same coin. Additionally they prepare well for approaches and methods useful and applicable in a broader mathematical context.

Highlights of the book include a solution to the famous 4m-conjecture of Erdös/Ko/Rado 1938, one of the oldest problems in combinatorial extremal theory, an answer to a question of Erdös (1962) in combinatorial number theory "What is the maximal cardinality of a set of numbers smaller than n with no k+1 of its members pair wise relatively prime?", and the discovery that the AD-inequality implies more general and sharper number theoretical inequalities than for instance Behrend's inequality.

Several concepts and problems in the book arise in response to or by rephrasing questions from information theory, computer science, statistical physics. The interdisciplinary character creates an atmosphere rich of incentives for new discoveries and lends Ars Combinatoria a special status in mathematics.

At the end of each chapter, problems are presented in addition to exercises and sometimes conjectures that can open a reader's eyes to new interconnections.

Titel
Lectures on Advances in Combinatorics