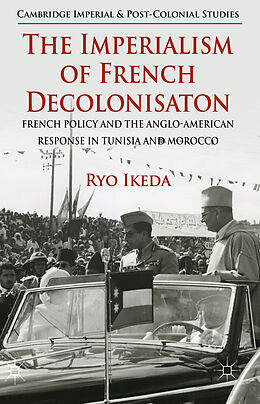 The Imperialism of French Decolonisaton

This book examines French motivations behind the decolonisation of Tunisia and Morocco and the intra-Western Alliance relationships. It argues that changing French policy towards decolonisation brought about the unexpectedly quick process of independence of dependencies in the post-WWII era.

Grounded in extensive primary research in France, the United Kingdom and the United States, Ikeda's book expands and deepens our knowledge of postwar decolonization in general and the Moroccan and Tunisian cases in particular. Focusing on two countries that have been little studied in the existing English-language literature, The imperialism of French decolonisation should be of considerable use to historians and readers interested in the process of decolonization. (Ronald Bruce St. John, International Affairs, Vol. 92 (1), January, 2016)

Ryo Ikeda is Associate Professor of International Relations at Kansai Gaidai University, Japan. His article 'The Paradox of Independence: The Maintenance of Influence and the French Decision to Transfer Power in Morocco' was featured in The Journal of Imperial and Commonwealth History.

Inhalt
List of Contents 1. Tunisia and Morocco under French Protectorates 2. The Commencement of Negotiations 3. The UN Debates in 1951 4. The UN Debates in 1952 5. The Impasse 6. Tunisia's Internal Autonomy 7. The Restoration of Mohammed V 8. Towards the Recognition of Independence 9. The Establishment of Diplomatic Relations

Titel
The Imperialism of French Decolonisaton