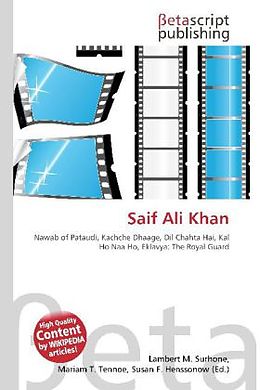 Please note that the content of this book primarily consists of articles available from Wikipedia or other free sources online. Saif Ali Khan (born 16 August 1970 in New Delhi, India) is an Indian actor in Bollywood films. He is the son of the Nawab of Pataudi, Mansoor Ali Khan Pataudi, and the actress Sharmila Tagore. He has two sisters; actress Saba Ali Khan and Soha Ali Khan. He is the heir apparent to the headships of both the royal houses of Bhopal and Pataudi.Khan made his debut in 1992 with Parampara. He had his first major successes with the 1994 films Main Khiladi Tu Anari and Yeh Dillagi. After going through several years of decline in the 1990s, he rose into prominence with his performance in Dil Chahta Hai (2001), which marked his professional turning point.