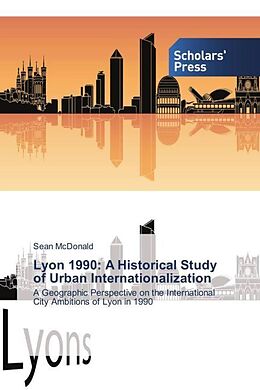 The primacy of Paris inhibits the regional sphere of activity of second-ranking French cities. Lyon is particularly disadvantaged in that to the west lies the low population density Massif Central, to the south is the city-port of Marseilles with direct international maritime connections, to the east, Grenoble is a dynamic and, to some extent, rival pole while to the north-east Geneva has a well-established international role. To combat the primacy if Paris, and the competition of neighboring cities, Lyon is justifiably attempting to develop an international and trans-national role to enhance its economic, political and demographic base. An examination of Lyon's status in the context of a theoretical model of an "International City", an empirical ranking of 165 European cities and Lyon's own long-range planning policy provide the framework for this study. Lyon's demographic strength, political situation, physical facilitators, (transportation, tourism and other infrastructure) and Lyon's international economic position will help place Lyon within the domestic and European urban hierarchy.

Sean M. McDonald is an Associate Professor of Geography at Bentley University. Previously, he was an International Trade Specialist with the U.S. Department of Commerce. He holds a doctorate in geography from Scotland's Glasgow University, has published in numerous academic journals, and is a partner at The Additional Research Group in Glasgow.