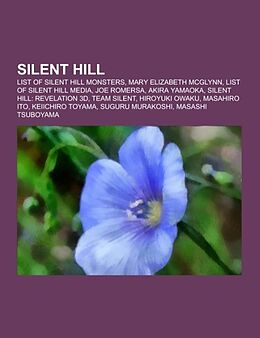 Source: Wikipedia. Pages: 30. Chapters: List of Silent Hill monsters, Mary Elizabeth McGlynn, List of Silent Hill media, Joe Romersa, Akira Yamaoka, Silent Hill: Revelation 3D, Team Silent, Hiroyuki Owaku, Masahiro Ito, Keiichiro Toyama, Suguru Murakoshi, Masashi Tsuboyama. Excerpt: The following is a list of monsters in the video game series Silent Hill. Skulking, humanoid creatures trapped in what appears to be straitjackets made from their own flesh. They attack by spewing a spray of acidic mist from an opening in their chest. They are slow whilst standing upright, but when knocked down they stay in a lying position and move by skittering very quickly along the ground. The Patient Demon symbolizes a hospital and/or mental patient squirming in agony, and are also a manifestation of James Sunderland's internal suffering. They also allude to James' sexual frustration, as they appear to be wearing thong underwear and heeled boots. The creature has been nicknamed Body Bag, Straight-Jacket, No Arm-ies, Condom Man, and Patient Demon prior to the release of The Book of Lost Memories which confirmed the official name. Headless, armless living sewing dummies which bear a resemblance to German artist Hans Bellmer's Dolls, directly modeled after the images from some of his work, depicting two sets of legs joined by their waists. These monsters consist of a feminine human torso and legs, upon which rest two more legs standing upright. The top pair of legs are used for striking while the bottom pair are used for walking. The creatures react highly to light and tend to stand still in plain sight. However, once the player approaches about three to five feet away they spring to life and start to attack. The Mannequin is a manifestation of James' natural urges and inclinations. Although they are not overly strong creatures, they have the advantage of stealth, as the radio will not emit any static to warn the player of their presence until the mannequin moves. They are commonly found in the apartment buildings and the Hotel. Well endowed, zombie-like nurses wearing low-cut outfits. Their heads are grotesquely swollen and face backwards, convulsing violently. The nurses are quicker on their feet than most of the other monsters and wield pipes that can deal heav