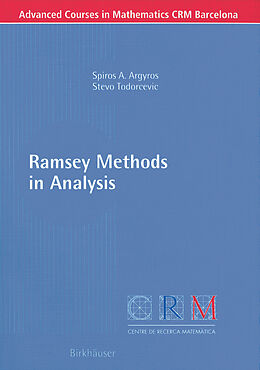 This book introduces graduate students and resarchers to the study of the geometry of Banach spaces using combinatorial methods. The combinatorial, and in particular the Ramsey-theoretic, approach to Banach space theory is not new, it can be traced back as early as the 1970s. Its full appreciation, however, came only during the last decade or so, after some of the most important problems in Banach space theory were solved, such as, for example, the distortion problem, the unconditional basic sequence problem, and the homogeneous space problem. The book covers most of these advances, but one of its primary purposes is to discuss some of the recent advances that are not present in survey articles of these areas. We show, for example, how to introduce a conditional structure to a given Banach space under construction that allows us to essentially prescribe the corresponding space of non-strictly singular operators. We also apply the Nash-Williams theory of fronts and barriers in the study of Cezaro summability and unconditionality present in basic sequences inside a given Banach space. We further provide a detailed exposition of the block-Ramsey theory and its recent deep adjustments relevant to the Banach space theory due to Gowers.

"This book is the result of lectures given by the authors aimed at bringing young researchers to the forefront of a 'very active research area lying on the borderline between analysis and combinatorics'This book will certainly be appreciated by experts. It is also valuable for young researchers who are suitably prepared and wish to work in this amazing area."   Mathematical Reviews

Zusammenfassung
This book contains two sets of notes prepared for the Advanced Course on R- sey Methods in Analysis given at the Centre de Recerca Matem` atica in January 2004, as part of its year-long research programme on Set Theory and its Appli- tions. The common goal of the two sets of notes is to help young mathematicians enter a very active area of research lying on the borderline between analysis and combinatorics. The solution of the distortion problem for the Hilbert space, the unconditional basic sequence problem for Banach spaces, and the Banach ho- geneous space problem are samples of the most important recent advances in this area, and our two sets of notes will give some account of this. But our main goal was to try to expose the general principles and methods that lie hidden behind and are most likely useful for further developments. The goal of the ?rst set of notes is to describe a general method of building norms with desired properties, a method that is clearly relevant when testing any sort of intuition about the in?nite-dimensional geometry of Banach spaces. The goal of the second set of notes is to expose Ramsey-theoretic methods relevant for describing the rough structure present in this sort of geometry. We would like to thank the coordinator of the Advanced Course, Joan Ba- ria, and the director of the CRM, Manuel Castellet, for giving us this challenging but rewarding opportunity. Part A SaturatedandConditional StructuresinBanachSpaces SpirosA.