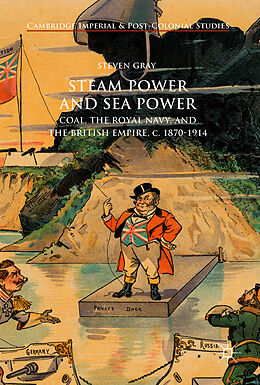 This book examines how the expansion of a steam-powered Royal Navy from the second half of the nineteenth century had wider ramifications across the British Empire. In particular, it considers how steam propulsion made vessels utterly dependent on a particular resource coal and its distribution around the world. In doing so, it shows that the 'coal question' was central to imperial defence and the protection of trade, requiring the creation of infrastructures that spanned the globe. This infrastructure required careful management, and the processes involved show the development of bureaucracy and the reliance on the 'contractor state' to ensure this was both robust and able to allow swift mobilisation in war. The requirement to stop regularly at foreign stations also brought men of the Royal navy into contact with local coal heavers, as well as indigenous populations and landscapes. These encounters and their dissemination are crucial to our understanding of imperial relationships and imaginations at the height of the imperial age.

Develops a new angle to the study of industrial commodities

Autorentext
Steven Gray is Lecturer in the History of the Royal Navy at the University of Portsmouth, UK, where he teaches on the MA in Naval History. His PhD, completed at the University of Warwick, won the British Commission for Maritime History Doctoral prize for the best doctoral thesis, 2014.