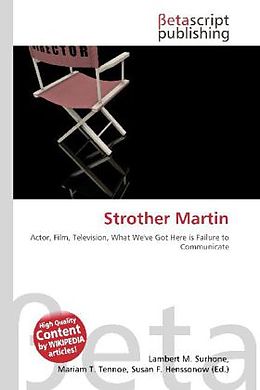 Please note that the content of this book primarily consists of articles available from Wikipedia or other free sources online. Strother Martin (March 26, 1919 August 1, 1980) was an American actor in numerous films and television programs. Martin is perhaps best known as the prison "captain" in the 1967 film Cool Hand Luke, where he uttered the line, "What we''ve got here is failure to communicate." Strother Martin Jr. was born in Kokomo, Indiana. As a child, he excelled at swimming and diving, and got the nickname "T-Bone Martin" from his diving expertise. At 17, he won the National Junior Springboard Diving Championship. He served as a swimming instructor in the U.S. Navy during World War II and was a member of the diving team at the University of Michigan. He entered the adult National Springboard Diving competition in hopes of gaining a berth on the U.S. Olympic team, but finished third in the competition.