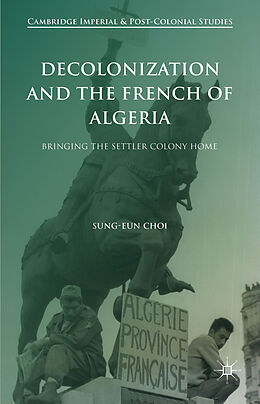 Decolonization and the French of Algeria

In 1962, almost one million people were evacuated from Algeria. France called these citizens Repatriates to hide their French Algerian origins and to integrate them into society. This book is about Repatriation and how it became central to France's postcolonial understanding of decolonization, the Algerian past, and French identity.

Sung-Eun Choi's research and analysis in Decolonization and the French of Algeria: Bringing the Settler Colony Home extend beyond settlers to encompass the variety of movements towards France that occurred immediately prior to and in the wake of Algerian independence in 1962. For historians of the Fifth Republic, or those examining l'exode from Algeria, Choi offers a vision of the motivations for or against embracing repatriate demands in the years and decades after Algerian independence. (Megan Brown, The Journal of North African Studies, Vol. 21 (4), August, 2016)

Sung Eun Choi is Assistant Professor in History at Bentley University in Massachusetts, USA. She specializes in French decolonization and settler colonial histories.

Titel
Decolonization and the French of Algeria