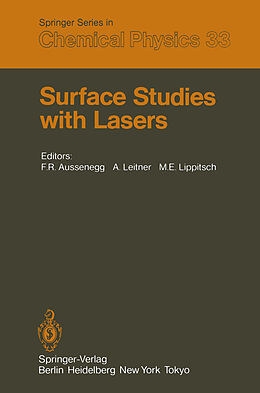 The physics and chemistry of surfaces is becoming more and more important as an exciting field of basic research as well as in devices and technology. The diagnoses and the conditioning of surfaces and studies of molecular interac tions with surfaces have made large advancements by using laser techniques. With its divisional meeting 1983 the Quantum Electronics Division of the European Physical Society tried to set up a forum where the latest ideas and achievements could be presented and discussed. The wide range of topics (gen eral surface spectroscopy, surface-enhanced optical processes, laser surface spectroscopy, laser-induced processes at surfaces) was deliberately chosen to provide an opportunity for specialists from one field to get acquainted with the techniques and results from others. This meeting took place in Mauterndorf, Austria, from March 9th to March 11th, 1983. Mauterndorf is a small village in the Austrian Alps, situated in a well-known skiing area. The conference was held in a medieval castle adapt ed as a conference center. These stimulating surroundings guaranteed a vivid exchange of ideas among the 98 participants from 17 nations. Among the numerous people engaged in the organization, our special thanks go to Mrs. I. Mandl and Mrs. B. Seeberg for doing a superb job in implementing the meeting arrangements and efficiently prompting the authors to deliver their manuscripts for this volume in time.