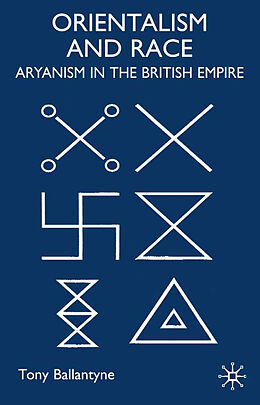 This study traces the emergence and dissemination of Aryanism within the British Empire. The idea of an Aryan race became an important feature of imperial culture in the nineteenth century, feeding into debates in Britain, Ireland, India, and the Pacific. The global reach of the Aryan idea reflected the complex networks that enabled the global reach of British Imperialism. Tony Ballantyne charts the shifting meanings of Aryanism within these 'webs' of Empire.

'An impressive first book...His grasp of three imperial locations...makes for a powerful analysis. It is an important piece of work and deserves to be widely read.' - Catherine Hall, Journal of Modern History

'Tony Ballantyne has done a masterful job... an excellent start for historians interested in tracing a world system of ideas. The work...will appeal to a broad audience of scholars. I recommend it to anyone interested in New Zealand, India, the intellectual foundations of imperialism, Orientalism in general, or simply the history of ideas.' - Journal of World History

'An important work...innovative and lucid...Combining a wide-ranging comparative framework with rigorous analysis of textual links and intellectual influences, the work has broken the mould of intellectual histories of the British empire. Ballantyne has done imperial history a major service.' - History Workshop Journal

'This is no token attempt at transnational history. It is the real thing.' - James Belich, American Historical Review

'...stands out from its contemporaries in presenting the empire...' - Mrinalini Sinha, Journal of Colonialism and Colonial History

'Orientalism and Race is a roaming work that encapsulates more material than one would have thought possible in fewer than 200 pages...provides a new perspective on the study of history, colonialism and the humanities.' - Ian Malcolmson, University of Auckland, New Zealand

Autorentext
TONY BALLANTYNE is Lecturer in History at the University of Otago, Dunedin, New Zealand. His research focuses on the interconnections between South Asian and British history, with a particular emphasis on the intellectual and cultural networks that reshaped South Asia in the nineteenth century. His other publications include Between Colonialism and Diaspora: Sikh Cultural Formations in an Imperial World (2006) and Bodies in Contact: Rethinking Colonial encounters in World History (2005), co-edited with Antoinette Burton.

Inhalt
Acknowledgements Introduction: Aryanism and the Webs of Empire The Emergence of Aryanism: Company Orientalism, Colonial Governance and Imperial Ethnology Indocentrism on the New Zealand Frontier: Geographies of Race, Empire and Nation Systematizing Religion: From Tahiti to the Tat Khalsa 'Hello Ganesha!': Indocentrism and the Interpretation of Maori Religion Print, Literacy, and the Recasting of Maori Identities The Politics of Language, Nation, and Race: Hindu Identities in the Late Nineteenth Century Conclusion: Knowledge, Empire, Globalization Bibliography Index