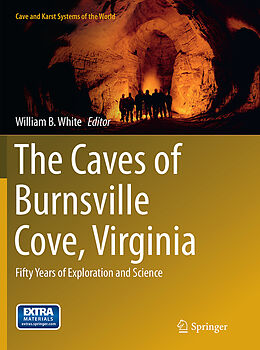 The Caves of Burnsville Cove, Virginia

This book highlights some of the most difficult and persistent exploration ever undertaken in the United States in Burnsville Cove, a small limestone valley in west-central Virginia while at the same time reviewing the scientific discoveries made in the area's 116 km of caves in the course of 50 years. Overall, the book offers a unique combination of exploration and science by a conservation organization specifically dedicated to the preservation and study of the caves.

Includes hundreds of color photographs of caves and cave minerals

Autorentext
Dr. William B. White developed an early interest in caves and karst and started serious caving with an undergraduate summer job at Lincoln Caverns in 1951. In the 1950s he conducted investigations of many caves in central Pennsylvania and the Greenbrier Valley in West Virginia and has continued world-wide karst research projects for fifty years. Dr. White frequently collaborates with his wife, Dr. Elizabeth L. White, on karst hydrology studies and has been the advisor to numerous graduate students working on karst related topics. Dr. White authored numerous research papers and books dealing with karst. He was one of the first researchers in the United States to directly apply the laws of chemistry and physics to explain many of the seemingly mysterious characteristics of karst landforms. His papers on karst related topics cover a remarkably diverse range of specialties including geomorphic studies of karst drainage basins, hydraulics of water flow through limestone caves, kinetics of carbonate dissolution, transport of sediments through caves and the mineralogy of cave formations (speleothems). He is now retired from his dual appointment in the Department of Geosciences and in the Materials Research Laboratory at the Pennsylvania State University.