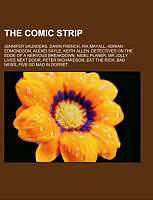 Source: Wikipedia. Pages: 30. Chapters: Jennifer Saunders, Dawn French, Rik Mayall, Adrian Edmondson, Alexei Sayle, Keith Allen, Detectives on the Edge of a Nervous Breakdown, Nigel Planer, Mr Jolly Lives Next Door, Peter Richardson, Eat the Rich, Bad News, Five Go Mad in Dorset, The Bullshitters: Roll Out The Gunbarrel, Didn't You Kill My Brother?, The Strike, The Supergrass, GLC: The Carnage Continues..., 20th Century Coyote, Arnold Brown, Pete Richens. Excerpt: Jennifer Jane Saunders (born 6 July 1958) is an English comedienne, screenwriter, singer and actress. She has won two BAFTAs, an International Emmy Award, a British Comedy Award, a Rose d'Or Light Entertainment Festival Award, two Writers' Guild of Great Britain Awards, and a Peoples Choice Award. She first came into widespread attention in the 1980s and early 1990s when she became a member of The Comic Strip after graduating from the Central School of Speech and Drama. Along with her comedy partner Dawn French, she writes and stars in their eponymous sketch show, French & Saunders, and has received international acclaim for writing and playing the lead role of Edina Monsoon in the BBC sitcom Absolutely Fabulous. In her other work, she has guest starred in the American sitcoms Roseanne and Friends, and won the American People's Choice Award for voicing the wicked Fairy Godmother in DreamWorks' animated Shrek 2. More recently, she wrote and starred in Jam & Jerusalem and The Life and Times of Vivienne Vyle. Saunders was born in Sleaford, Lincolnshire on 6 July 1958. Her mother was a biology teacher, and her father served as a pilot in the Royal Air Force (RAF) and reached the rank of Air Marshal and later work for British Aerospace. Because her father was in the armed forces, Saunders moved to different schools many times. She was educated from the age of five to eighteen in boarding schools and then at St Paul's Girls' School, an independent school in west London. After school, she worked for a year in Italy as an au pair. She later received a place at the Central School of Speech and Drama in London on a drama teachers' course in 1977, where she met her future comedy partner, Dawn French. Both came from RAF backgrounds. They had grown up on the same base, even having had the same best friend, without ever meeting. The comic duo originally did not get on well, and as far as Saunders was concerned, French was a "cocky little upstart". The distrust was mutual; French