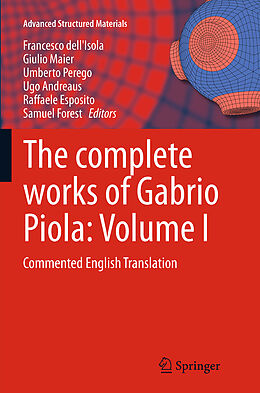 The complete works of Gabrio Piola: Volume I

Gabrio Piola had an enormous impact on the development of applied mathematics and continuum mechanics. This book offers the first English translation of Piola's complete work, detailing the milestones he set in applied mathematics.

Gabrio Piola works had an enormous impact on the development of applied mathematics and continuum mechanics. An excellent scientific committee who took it upon themselves to translate his complete works. In a second step, they commented Piola's work and compared it to modern theories in mechanics in order to stress Piola's impact on modern science and proofs that he has set milestones in applied mathematics.
This book presents Piola's original Italian texts together with is translations and their comments. It shows impressively that Gabrio Piola's work must still be regarded as a modern theory.

About the fundamental equations of the motion of bodies whatsoever, as considered following the natural their form and constitution.- On a Debated Principle of Lagrange's Analytical Mechanics And on its Multiple Applications.- 1818 Eulogy in memoriam of Vincenzo Brunacci by Prof. Gabrio Piola.- Least action principle for second gradient continua and capillary _uids: a Lagrangian approach following Piola's point of view.- A still topical contribution of Gabrio Piola to Continuum Mechanics: the creation of peridynamics, non-local and higher gradient continuum mechanics.- Gabrio Piola and Balance Equations.- Gabrio Piola and Mathematical Physics.

Titel
The complete works of Gabrio Piola: Volume I