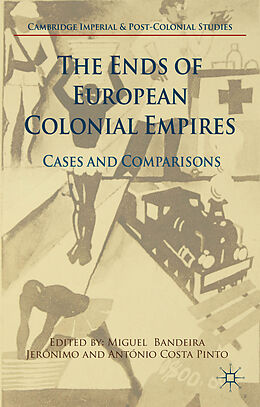 The Ends of European Colonial Empires

This volume provides a multidimensional assessment of the diverse ends of the European colonial empires, addressing different geographies, taking into account diverse chronologies of decolonization, and evaluating the specificities of each imperial configuration under appreciation (Portuguese, Belgian, French, British, Dutch).

'In this collection two ambitious Portuguese scholars assemble an impressive cast of contributors to rethink the demise - or reconfiguration - of European power in Africa. Eschewing morality plays and polemics for historical analysis, the authors add nuance and complexity to the decolonization, the most important phenomenon of 20th century history - making their book essential reading for the growing number of students interested in this crucial topic.'

'It is perhaps surprising that decolonisation has remained stubbornly resistant to theorisation. Comparative analysis offers a means to redress things, making this collection especially valuable to researchers and students alike. Interrogating the meanings of decolonisation, its local and global implications, and its material consequences both foreseen and unforeseen, the essays in this collection complement one another well.'

'With a range from the 1940s to the 1970s and beyond, the selection of distinguished and innovative younger historians guide the reader through conceptual issues in a way that is consistently compelling. The individual chapters are integrated into an overall, coherent account of a critical period in world history. A vital read for all those interested in the dissolution of the European colonial empires and the aftermath of decolonization.'

Inhalt
Introduction: The Ends of Empire: Chronologies, Historiographies, and Trajectories; Miguel Bandeira Jerónimo and António Costa Pinto PART I: COMPETING DEVELOPMENTS: THE IDIOMS OF REFORM AND RESISTANCE 1. Development, Modernization, and the Social Sciences in the Era of Decolonization: The Examples of British and French Africa; Frederick Cooper 2. A Modernizing Empire? Politics, Culture and Economy in Portuguese Late Colonialism; Miguel Bandeira Jerónimo and António Costa Pinto 3. Commanders With or Without Machine-Guns: Robert Delavignette and the Future of the French-African 'Imperial Nation-State', 1956-58; Martin Shipway PART II: COMPARING ENDGAMES: THE MODI OPERANDI OF DECOLONIZATION 4. Imperial Endings and Small States: Disorderly Decolonization for Netherlands, Belgium and Portugal; Crawford Young 5. British, French and Portuguese Decolonization Compared: Political Culture and Strategic Options in Multilateral Consultations; Bruno Cardoso Reis 6. Exporting Britishness: Decolonisation in Africa, the British State and its Clients; Sarah Stockwell 7. Acceptable Levels? The Use and Threat of Violence in the Decolonization of British Central Africa, 1953-1965; Philip Murphy PART III: CONFRONTING INTERNATIONALS: THE (GEO)POLITICS OF DECOLONIZATION 8. Inside the Parliament of Man: Decolonization, Apartheid, and the Remaking of the United Nations, 1945-1970; Ryan Irwin 9. Cold War and Decolonisation in the Congo: Lumumba and the Neo-colonial Transfer of Power 1960; John Kent 10. The International Dimension of Portuguese Colonial Crisis, 1961-1968; Luís Nuno Rodrigues Last Days of Empire; John Darwin