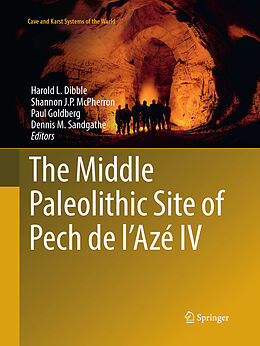 This book provides comprehensive information on the materials excavated at Pech de l'Azé IV, both by the original excavator François Bordes in the 1970s, and more recently by the authors and their scientific team. Applying a range of new excavation and analytical techniques, it presents detailed material on the formation of the site, its chronology and the nature of the hominin occupations. Pech de l'Azé IV is part of a complex of Lower and Middle Paleolithic cave sites in the Dordogne Valley of southwestern France. Although this region is well known for its rich concentration of Paleolithic sites since the mid-19th century and many of the sites have been repeatedly excavated, no detailed studies have fully documented the stone tool technology and faunal remains or the changes in them over time. The site was regularly occupied by groups of Neanderthals from approximately 100,000 to 40,000 years ago, during which time global-scale changes transformed the region from a relatively warm climate (similar to today's) to a very cold, glacial one. The site provides valuable insights into changes in Neanderthal behavior that reflect, at least in part, their adaptation to changes in the environment and the availability of important resources, such as prey species.