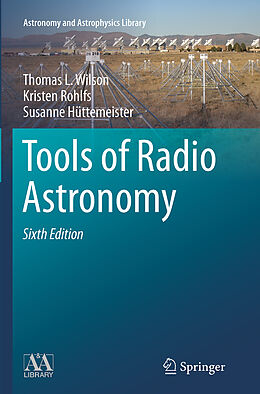 This 6th edition of Tools of Radio Astronomy, the most used introductory text in radio astronomy, has been revised to reflect the current state of this important branch of astronomy. This includes the use of satellites, low radio frequencies, the millimeter/sub-mm universe, the Cosmic Microwave Background and the increased importance of mm/sub-mm dust emission.

Several derivations and presentations of technical aspects of radio astronomy and receivers, such as receiver noise, the Hertz dipole and beam forming have been updated, expanded, re-worked or complemented by alternative derivations. These reflect advances in technology.

The wider bandwidths of the Jansky-VLA and long wave arrays such as LOFAR and mm/sub-mm arrays such as ALMA required an expansion of the discussion of interferometers and aperture synthesis. Developments in data reduction algorithms have been included.

As a result of the large amount of data collected in the past 20 years, the discussion of solar system radio astronomy, dust emission, and radio supernovae has been revisited.

The chapters on spectral line emission have been updated to cover measurements of the neutral hydrogen radiation from the early universe as well as measurements with new facilities. Similarly the discussion of molecules in interstellar space has been expanded to include the molecular and dust emission from protostars and very cold regions.

Several worked examples have been added in the areas of fundamental physics, such as pulsars.

Both students and practicing astronomers will appreciate this new up-to-date edition of Tools of Radio Astronomy.

Includes treatments of the wider bandwidths in use on by modern radio, mm and sub-mm arrays

Thomas Wilson graduated with a BS in Physics from St. Joseph's College in Philadelphia and went on to study under B. F. Burke at MIT for his doctoral work in physics, which focused on 'Radio Studies of HII Regions.' After graduating from MIT, Wilson was a post-doctoral fellow at the NRAO in Charlottesville. Afterward Wilson was on staff at Max-Planck-Inst. f. Radioastronomy from 1969-2004, then Project Scientist (2004-6), Associate Director (2006-8) and at European Southern Observatory, Director of the Sub-mm Telescope Observatory (1997-2002), and subsequently Senior Scientist at ALMA (Atacama Large Mm/sub-mm Array) (Feb 2009 to March 2010). As of April 2010, he is the Branch Head at the Naval Research Laboratory.

Kristen Rohlfs studied Astronomy and Physics and received a PhD in 1961 in Hamburg. After his postdoctoral lecture qualification in 1965 he worked at the Max-Planck-Institute for Radioastronomy in Bonn. Starting in 1974 he taught at the Astronomy Institute Ruhr of University Bochum and is now emeritus professor.

Susanne Hüttemeister received a Ph.D. in Astronomy by the Bonn University. She had a position as Postdoctoral Fellow at the Harvard-Smithsonian Center for Astrophysics, Cambridge (USA) and teaching assignments at RWTH Aachen (Aachen Technical University) and Bonn University. Dr. Hüttemeister is now the Director of Bochum Planetarium and Adjunct Professor at the Astronomy Institute of Ruhr University Bochum.