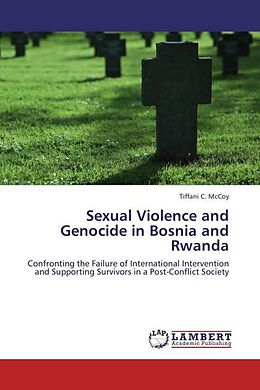 Sexual Violence and Genocide in Bosnia and Rwanda

Sexual violence has come to be viewed as an expected by-product of war. The increasing usage of sexual violence as a weapon, particularly against women, should be explored and understood in order to address this outrage. This book explores how sexual violence was used as a weapon during the genocides in Bosnia and Herzegovina and in Rwanda, arguing that women suffered from a double dehumanization process in their gendered roles and as members of a targeted ethnic group. This book highlights the important contributions made by the International Criminal Tribunals for the former Yugoslavia and for Rwanda in bringing war criminals to justice and for landmark decisions of International Law. While the roles of the courts are praised, the international community is criticized for failing to act to stop the genocides.

Tiffani C. McCoy is currently a Master of Arts Candidate for International Affairs at The New School in New York City. She holds a Master of Arts in Women's Studies and a Bachelor of Science in Sociology.

Titel
Sexual Violence and Genocide in Bosnia and Rwanda