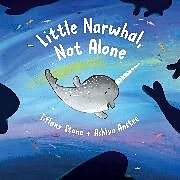 “This picture book about an interspecies friendship has plenty of lessons for humans, too.”
—Kirkus Reviews

“An unusual true story of friendship beyond species.”
—The International Educator

Tiffany Stone is a children’s poet and critically acclaimed picture book author. She was inspired to write Little Narwhal, Not Alone by her lifelong affinity with the North (her dad worked in the Canadian Arctic and Greenland) and by her volunteer work with new immigrants. She lives in B.C. with her family and a plethora of pets.

Ashlyn Anstee is an illustrator who spent her summers growing up swimming in the waters of the Canadian west coast. She's written and illustrated three books, and lives in Los Angeles with her husband and their cats.

MARIE NOËL was born in France where she studied marine biology. Her passion for marine mammals led her to travel and study in Belgium, Sweden, the US, and finally the west coast of Canada where she completed her PhD at the University of Victoria, British Columbia (2013). She specializes in investigating the levels and impacts of contaminants in marine mammals. She has worked on gray seals from the Baltic Sea, beluga whales from the western Arctic and harbour seals and killer whales from the Pacific Northwest. She currently manages the Ocean Wise Conservation Association’s Ocean Pollution Research Program and resides in Gibsons, British Columbia, Canada.

Based on a true story, this sweet and playful picture book about a little lost narwhal introduces kids to the marine world and the surprising friendships under the sea.

When little narwhal sets off on an adventure to see new sights, he finds himself far from home, too far to return on his own. Scared and alone, narwhal looks for other narwhals but finds a pod of belugas instead. They don’t speak his language or eat the same foods, but when the belugas begin to play—little narwhal knows exactly what to do!

Includes a note from a marine biologist about the true events that inspired this story.