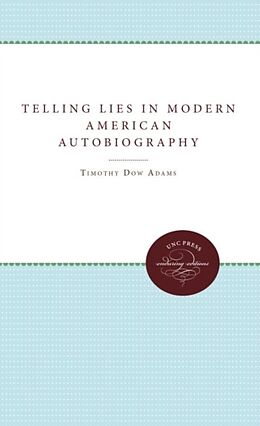 Klappentext All autobiographers are unreliable narrators. Yet what a writer chooses to misrepresent is as telling -- perhaps even more so -- as what really happened. Timothy Adams believes that autobiography is an attempt to reconcile one's life with one's self! and he argues in this book that autobiography should not be taken as historically accurate but as metaphorically authentic. Adams focuses on five modern American writers whose autobiographies are particularly complex because of apparent lies that permeate them. In examining their stories! Adams shows that lying in autobiography! especially literary autobiography! is not simply inevitable. Rather it is often a deliberate! highly strategic decision on the author's part. Throughout his analysis! Adams's standard is not literal accuracy but personal authenticity. He attempts to resolve some of the paradoxes of recent autobiographical theory by looking at the classic question of design and truth in autobiography from the underside -- with a focus on lying rather than truth. Originally published in 1990. A UNC Press Enduring Edition -- UNC Press Enduring Editions use the latest in digital technology to make available again books from our distinguished backlist that were previously out of print. These editions are published unaltered from the original! and are presented in affordable paperback formats! bringing readers both historical and cultural value.