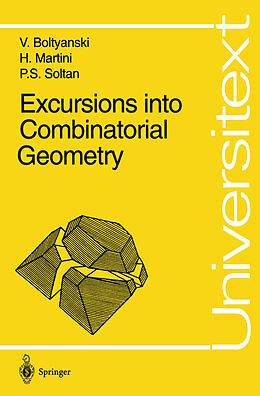 Geometry undoubtedly plays a central role in modern mathematics. And it is not only a physiological fact that 80 % of the information obtained by a human is absorbed through the eyes. It is easier to grasp mathematical con cepts and ideas visually than merely to read written symbols and formulae. Without a clear geometric perception of an analytical mathematical problem our intuitive understanding is restricted, while a geometric interpretation points us towards ways of investigation. Minkowski's convexity theory (including support functions, mixed volu mes, finite-dimensional normed spaces etc.) was considered by several mathe maticians to be an excellent and elegant, but useless mathematical device. Nearly a century later, geometric convexity became one of the major tools of modern applied mathematics. Researchers in functional analysis, mathe matical economics, optimization, game theory and many other branches of our field try to gain a clear geometric idea, before they start to work with formulae, integrals, inequalities and so on. For examples in this direction, we refer to [MalJ and [B-M 2J. Combinatorial geometry emerged this century. Its major lines of investi gation, results and methods were developed in the last decades, based on seminal contributions by O. Helly, K. Borsuk, P. Erdos, H. Hadwiger, L. Fe jes T6th, V. Klee, B. Griinbaum and many other excellent mathematicians.

Inhalt
I Convexity §1 Convex sets §2 Faces and supporting hyperplanes §3 Polarity §4 Direct sum decompositions §5 The lower semicontinuity of the operator 'exp' §6 Convex cones §7 The Farkas Lemma and its generalization §8 Separable Systems of convex cones II d-Convexity in normed spaces §9 The definition of d-convex sets §10 Support properties of d-convex sets §11 Properties of d-convex flats §12 The join of normed spaces §13 Separability of d-convex sets §14 The Helly dimension of a set family §15 d-Star-shaped sets II H-convexity §16 The functional md for vector systems §17 TheE-displacement Theorem §18 Lower semicontinuity of the functional md §19 The definition of H-convex-sets §20 Upper semicontinuity of H-convex hull §21 Supporting cones of H-convex bodies §22 The Helly Theorem for H-convex sets §23 Some applications of H-convexity §24 Some remarks on connection between d-convexity and H-convexity IV The Szökefalvi-Nagy Problem §25 The Theorem of Szökefalvi-Nagy and its generalization §26 Description of vector systems with md H=2 that are not one-sided §27 The 2-systems without particular vectors §28 The 2-system wiht particular vectors §29 The compact, convex bodies with md M=2 §30 Centrally symmetric bodies V Borsuk's partition problem §31 Formulation of the problem and a survey of results §32 Bodies of constant width in Euclidean and normed spaces §33 Borsuk's problem in normed spaces VI Homothetic covering and illumination §34 The main problem and a survey of results §35 The hypothesis of Gohberg-Markus-Hadwiger §36 The infinite values of the functionals b, b', c, c' §37 Inner illumination of convex bodies §38 Estimates for the value of the functional p(K) VII Cominatorial geometry of belt bodies §39 The integral representation of zonoids §40 Beltvectors of a compact, convex body §41 Definition of belt bodies §42 Solution of the illuminations problem for belt bodies §43 Solution of the Szökefalvi-Nagy problem for belt bodies §44 Minumal fixing systems VIII Some research problems Bibliography Author Index Subject Index List of Symbols