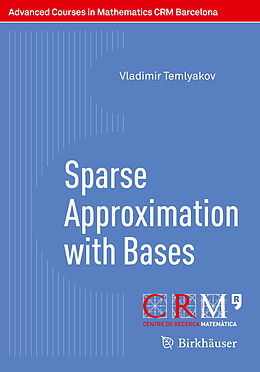 Motivated by numerous applications, the last decade has seen great successes in studying nonlinear sparse approximation. Recent findings have established that greedy-type algorithms are suitable methods of nonlinear approximation in both sparse approximation with respect to bases and sparse approximation with respect to redundant systems. These insights, combined with some previous fundamental results, form the basis for constructing the theory of greedy approximation. Taking into account the theoretical and practical demand for this kind of theory, the book systematically elaborates a theoretical framework for greedy approximation and its applications.
The book addresses the needs of researchers working in numerical mathematics, harmonic analysis, and functional analysis. It quickly takes the reader from classical results to the latest frontier, but is written at the level of a graduate course and does not require a broad background in the field.

This book mainly deals with a kind of interesting and current nonlinear approximation called m-term approximation, or sparse approximation, with bases. The book is based on numerous research papers of the author and is recommended to researchers working in approximation theory, numerical analysis, harmonic analysis and functional analysis. Also, it could be used for various graduate courses in the above mentioned topics. (Sorin Gheorghe Gal, zbMATH 1317.41019, 2015)