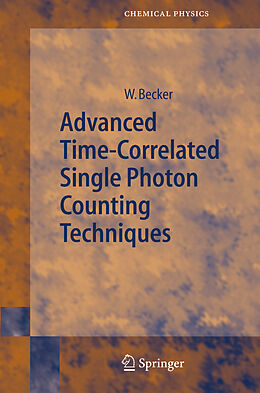 In 1984 Desmond O'Connor and David Phillips published their comprehensive book Time-correlated Single Photon Counting. At that time time-correlated s- gle photon counting, or TCSPC, was used primarily to record fluorescence decay functions of dye solutions in cuvettes. From the beginning, TCSPC was an am- ingly sensitive and accurate technique with excellent time-resolution. However, acquisition times were relatively slow due to the low repetition rate of the light sources and the limited speed of the electronics of the 70s and early 80s. Moreover, TCSPC was intrinsically one-dimensional, i.e. limited to the recording of the wa- form of a periodic light signal. Even with these limitations, it was a wonderful te- nique. More than 20 years have elapsed, and electronics and laser techniques have made impressive progress. The number of transistors on a single chip has approximately doubled every 18 months, resulting in a more than 1,000-fold increase in compl- ity and speed. The repetition rate and power of pulsed light sources have increased by about the same factor.

Wolfgang Becker is a specialist of optical short-time measurement techniques and obtained his PhD 1979 in Berlin, Germany. Since 1993 he is the head of Becker & Hickl GmbH in Berlin. His field of interest is development and application of time-correlated single photon counting techniques. He is an amatuer astronomer and telescope maker and likes cats, skiing and beach volleyball.

Time-correlated single photon counting (TCSPC) is a remarkable technique for recording low-level light signals with extremely high precision and picosecond-time resolution. TCSPC has developed from an intrinsically time-consuming and one-dimensional technique into a fast, multi-dimensional technique to record light signals. So this reference and text describes how advanced TCSPC techniques work and demonstrates their application to time-resolved laser scanning microscopy, single molecule spectroscopy, photon correlation experiments, and diffuse optical tomography of biological tissue. It gives practical hints about constructing suitable optical systems, choosing and using detectors, detector safety, preamplifiers, and using the control features and optimising the operating conditions of TCSPC devices. Advanced TCSPC Techniques is an indispensable tool for everyone in research and development who is confronted with the task of recording low-intensity light signals in the picosecond and nanosecond range.