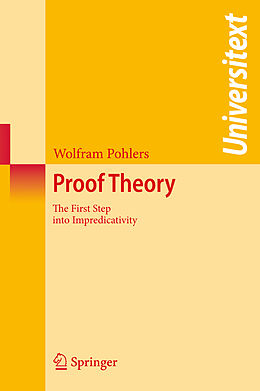 This book on proof theory needs no previous knowledge of proof theory. Avoiding cryptic terminology as much as possible, it starts at an elementary level and displays the connections between infinitary proof theory and generalized recursion theory.


The kernel of this book consists of a series of lectures on in?nitary proof theory which I gave during my time at the Westfalische ¨ Wilhelms-Universitat ¨ in Munster ¨ . It was planned as a successor of Springer Lecture Notes in Mathematics 1407. H- ever, when preparing it, I decided to also include material which has not been treated in SLN 1407. Since the appearance of SLN 1407 many innovations in the area of - dinal analysis have taken place. Just to mention those of them which are addressed in this book: Buchholz simpli?ed local predicativity by the invention of operator controlled derivations (cf. Chapter 9, Chapter 11); Weiermann detected applications of methods of impredicative proof theory to the characterization of the provable recursive functions of predicative theories (cf. Chapter 10); Beckmann improved Gentzen's boundedness theorem (which appears as Stage Theorem (Theorem 6. 6. 1) in this book) to Theorem 6. 6. 9, a theorem which is very satisfying in itself - though its real importance lies in the ordinal analysis of systems, weaker than those treated here. Besides these innovations I also decided to include the analysis of the theory (? -REF) as an example of a subtheory of set theory whose ordinal analysis only 2 0 requires a ?rst step into impredicativity. The ordinal analysis of(? -FXP) of non- 0 1 0 monotone? -de?nable inductive de?nitions in Chapter 13 is an application of the 1 analysis of(? -REF).

"Proof Theory takes various axiom systems that treat induction in different ways and analyzes them from the ordinal viewpoint to gauge their relative strengths. This new version includes several developments in the field that have occurred over the twenty years since the original. Although the current book, appearing in the Universitext series, claims to be 'pitched at undergraduate/graduate level,' an undergraduate course out of Proof theory would be ambitious indeed." (Leon Harkleroad, The Mathematical Association of America, March, 2009)

"The book is addressed primarily to students of mathematical logic interested in the basics of proof theory, and it can be used both for introductory and advanced courses in proof theory. this book may be recommended to a larger circle of readers interested in proof theory." (Branislav Boricic, Zentrablatt MATH, Vol. 1153, 2009)

This is a textbookan excellent oneon proof theory, starting from the very elementary (heuristic accounts of sets, ordinals, logic, etc.), and going into a sophisticated area (impredicativity). The author's main tool is enquiry into truth complexity and ordinal analysis. (M. Yasuhara, Mathematical Reviews, Issue 2010 a)

Wolfram Pohlers (born 1943) is Full Professor and Director of the Institute for Mathematical Logic and Foundational Resarch at the Westfälische Wilhelms-Universität in Münster, Germany. He received his scientific training at the University of Munich where he worked as an Associate Professor from 1980 to 1985. From 1989 to 1990 he was a visiting scholar at the MSRI in Berkley and in 2005 he taught at the Ohio State University in Columbus.

This book verifies with compelling evidence the author's intent to "write a book on proof theory that needs no previous knowledge of proof theory". Avoiding the cryptic terminology of proof theory as far as possible, the book starts at an elementary level and displays the connections between infinitary proof theory and generalized recursion theory, especially the theory of inductive definitions. As a "warm up" Gentzen's classical analysis of pure number theory is presented in a more modern terminology, followed by an explanation and proof of the famous result of Feferman and Schütte on the limits of predicativity. The author also provides an introduction to ordinal arithmetic, introduces the Veblen hierarchy and employs these functions to design an ordinal notation system for the ordinals below Epsilon 0 and Gamma 0, while emphasizing the first step into impredicativity, that is, the first step beyond Gamma 0. This is first done by an analysis of the theory of non-iterated inductive definitions using Buchholz's improvement of local predicativity, followed by Weiermann's observation that Buchholz's method can also be used for predicative theories to characterize their provably recursive functions. A second example presents an ordinal analysis of the theory of $/Pi_2$ reflection, a subsystem of set theory that is proof-theoretically equivalent to Kripke-Platek set.

The book is pitched at undergraduate/graduate level, and thus addressed to students of mathematical logic interested in the basics of proof theory. It can be used for introductory as well as more advanced courses in proof theory.

Untertitel
The First Step into Impredicativity