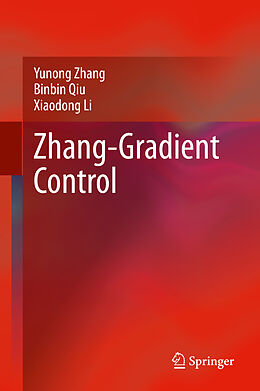 This book introduces readers to using the simple but effective Zhang-gradient (ZG) method to solve tracking-control problems concerning various nonlinear systems, while also highlighting the applications of the ZG method to tracking control for practical systems, e.g. an inverted-pendulum-on-a-cart (IPC) system and a two-wheeled mobile robot (showing its potential applications).
In addition to detailed theoretical analyses of ZG controllers, the book presents a wealth of computer simulations to demonstrate the feasibility and efficacy of the controllers discussed (as well as the method itself). More importantly, the superiority of ZG controllers in overcoming the division-by-zero (DBZ) problem is also illustrated.
Given its scope and format, the book is well suited for undergraduate and graduate students, as well as academic and industrial researchers in the fields of neural dynamics/neural networks, nonlinear control, computer mathematics, time-varying problem solving, modeling and simulation, analog hardware, and robotics.

Yunong Zhang received the B.S. degree from Huazhong University of Science and Technology, Wuhan, China, in 1996, the M.S. degree from South China University of Technology, Guangzhou, China, in 1999, and the Ph.D. degree from Chinese University of Hong Kong, Shatin, Hong Kong, China, in 2003. He is currently a professor at School of Data and Computer Science, Sun Yat-sen University, Guangzhou, China. Before joining Sun Yat-sen University in 2006, Yunong had been with National University of Singapore, University of Strathclyde, and National University of Ireland at Maynooth, since 2003. His main research interests include neural networks, robotics, computation and optimization. He has been working on the researches and applications of neural networks for 20 years. He has now published totally 562 scientific works of various types with the number of SCI citations being 2486 and the number of Google citations being 5560. These include 13 monographs/books, 153 SCI papers (with 72 SCI papers published in recent 5 years), 43 IEEE-Transactions/ Magazine papers, 10 solely-authored works, and 426 first-authored works, crosswise. Yunong Zhang was supported by the Program for New Century Excellent Talents in Universities in 2007, was presented the Best Paper Award of ISSCAA in 2008 and the Best Paper Award of ICAL in 2011, and was among the Highly Cited Scholars of China selected and published by Elsevier from year 2014 to year 2018.

Binbin Qiu received the B.S. degree from Jiangxi University of Science and Technology, Ganzhou, China, in 2013, and the Ph.D. degree from Sun Yat-sen University, Guangzhou, China, in 2018. He is currently a postdoctoral fellow at School of Data and Computer Science, Sun Yat-sen University, Guangzhou, China. His main research interests include neural dynamics/neural networks, nonlinear systems, and robotics. He has published/accepted over 45 scientific papers as author or co-author (including 15 SCI papers).