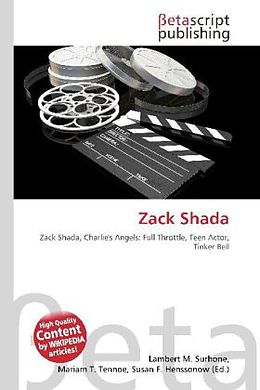 Please note that the content of this book primarily consists of articles available from Wikipedia or other free sources online.Zack Shada (born November 25, 1992 in Boise, Idaho) is an American teen actor.Shada appeared as Thin Boy in Charlie''s Angels: Full Throttle (2003), and as Nick Davis in the 2005 television movies Jane Doe: Vanishing Act, Jane Doe: Now You See It, Now You Don''t, Jane Doe: Till Death Do Us Part, and Jane Doe: The Wrong Face. He has appeared in two episodes of Lost, and voiced Slightly in Tinker Bell and Comet in Space Chimps.Shada has also starred as Dean''s best friend, Joey, in Disney series Wizards of Waverly Place.His brothers are actors Josh Shada and Jeremy Shada. He and his brother Josh and actors Christian Vandal and Adam Thompson are in a band called JACZ.