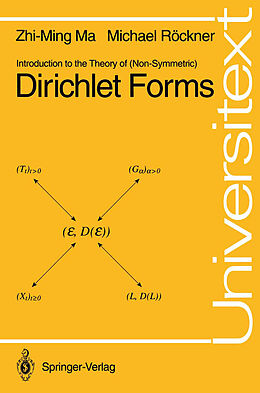 Introduction to the Theory of (Non-Symmetric) Dirichlet Forms

The purpose of this book is to give a streamlined introduction to the theory of (not necessarily symmetric) Dirichlet forms on general state spaces. It includes both the analytic and the probabilistic part of the theory up to and including the construction of an associated Markov process. It is based on recent joint work of S. Albeverio and the two authors and on a one-year-course on Dirichlet forms taught by the second named author at the University of Bonn in 1990/9l. It addresses both researchers and graduate students who require a quick but complete introduction to the theory. Prerequisites are a basic course in probabil ity theory (including elementary martingale theory up to the optional sampling theorem) and a sound knowledge of measure theory (as, for example, to be found in Part I of H. Bauer [B 78]). Furthermore, an elementary course on lin ear operators on Banach and Hilbert spaces (but without spectral theory) and a course on Markov processes would be helpful though most of the material needed is included here.

This book, suitable for a one-year graduate course, gives a streamlined introduction to the theory of Dirichlet forms on general state spaces, including both the analytic and probabilistic aspects. It will appeal to graduate and advanced undergraduate students of mathematics interested in probability and its interface with analysis and physics as well as to mathematical physicists.

Titel
Introduction to the Theory of (Non-Symmetric) Dirichlet Forms