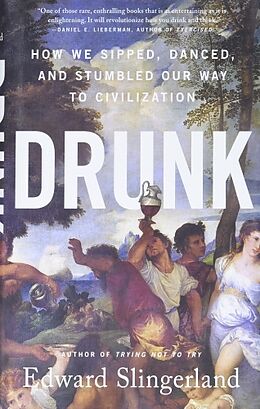 Préface
A deep dive into the alcohol-soaked origins of civilization - and the evolutionary roots of humanity's appetite for intoxication.

Auteur
Edward Slingerland is Distinguished University Scholar and Professor of Asian Studies at the University of British Columbia, with adjunct appointments in Psychology and Philosophy, as well as Co-Director of the Centre for the Study of Human Evolution, Cognition and Culture and Director of the Database of Religious History. Slingerland is the author of Trying Not to Try, which was named one of the best books of 2014 by The Guardian and Brain Pickings and was the subject of a piece by John Tierney in the New York Times. He has given talks on the science and power of spontaneity at a variety of venues across the world, including TEDx Maastricht and two Google campuses, and has done numerous interviews on TV, radio, blogs, and podcasts, including NPR, the BBC World Service and the CBC.

While plenty of entertaining books have been written about the history of alcohol and other intoxicants, none have offered a comprehensive, convincing answer to the basic question of why humans want to get high in the first place.

Drunk elegantly cuts through the tangle of urban legends and anecdotal impressions that surround our notions of intoxication to provide the first rigorous, scientifically-grounded explanation for our love of alcohol. Drawing on evidence from archaeology, history, cognitive neuroscience, psychopharmacology, social psychology, literature, and genetics, Slingerland shows that our taste for chemical intoxicants is not an evolutionary mistake, as we are so often told. In fact, intoxication helps solve a number of distinctively human challenges: enhancing creativity, alleviating stress, building trust, and pulling off the miracle of getting fiercely tribal primates to cooperate with strangers. Our desire to get drunk, along with the individual and social benefits provided by drunkenness, played a crucial role in sparking the rise of the first large-scale societies. We would not have civilization without intoxication.