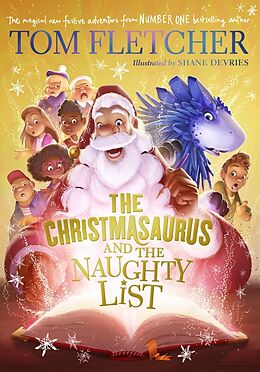 Welcome to the world of Tom Fletcher! Get ready for the BRAND NEW magical new adventure from the number one bestselling author!

Tom Fletcher (Author)
Tom Fletcher is a number one bestseller and one of the UK's most popular children's authors.

The Christmasaurus was the biggest debut middle-grade novel of 2016 and was shortlisted for a British Book Award. Since then Tom has published several more chart-topping children's novels including The Creakers, The Christmasaurus and the Winter Witch and the instant number one bestseller The Danger Gang.

For older readers, Tom co-authors the Eve of Man series with his wife Giovanna Fletcher. Tom's books have been translated into thirty-five languages and to date he has sold over 2.5 million copies of his books in the UK alone.

His debut novel, The Christmasaurus is currently being developed by The Greatest Showman director Michael Gracey into an animated, feature-length movie with original songs written by Tom.

As well as his career as an author, by the age of 21, Tom had penned 10 UK number 1 singles and is the founding member of the band McFLY. The Brit Award-winning band has sold over 10 million records worldwide and Tom has also written songs for other artists including One Direction, Busted and 5SOS.

Shane Devries (Illustrator)
Shane Devries is an illustrator from Adelaide, Australia. He began working as an architectural illustrator and has worked as a graphic designer and now creates visual development art for animation productions and illustrates books. Shane enjoys visiting art galleries, running and travelling and if possible he would spend countless hours gardening in his veggie patch.