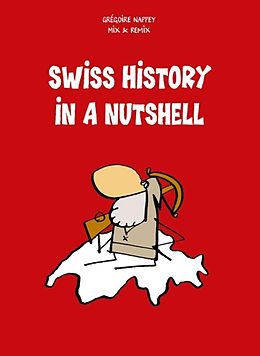 Swiss History in a Nutshell

Swiss History in a Nutshell gives you an easy-to-read insight into all the major facts of Switzerland s rich history. Illustrated with great humour and with its appealing concept, this book is the perfect companion to be well informed in a brief and accessible way. Among the topics are: the most fascinating moments in Switzerland's rich and colourful history; from its cavemen to its conquests, foundation, growth, independence and prosperity; Switzerland's surprising past as a leading military power in Europe; how Swiss democracy matured through several revolutions; the origins of Swiss cultural differences and how they were overcome to create a stable federal republic; how Switzerland's direct democracy, consensus politics and legendary good industrial relations were achieved. Cartoons (naughty and nice) illustrate this kaleidoscope of key events that have created Switzerland as it is today.

Contenu
IntroductionBefore Switzerland (pre-historic to 1291): Cavemen and lake dwellers, Our ancestors the Celts, Helvetia under the Roman Empire, Religions and languages, From the Franks to the Holy Roman EmpireThe foundations (1291-1516): The creation of Switzerland, Victories against the Habsburgs, The century of conquests, MarignanoAn independent country (1517-1798): The Reformation, The Reformation and westward expansion, the Ancien Régiime, Full independence, The growth of Swiss territoryTransition to modern Switzerland (1798-1847): Revolution in Switzerland, The Republic and the Act of Mediation, From thirteen to twenty-two cantons, Restoration and Regeneration, The Sonderbund warThe establishment of the Federal State (1848-1914): The first Federal Constituton, The Constitution of 1874, Foreign relations, Economy and Society, The labour movementThe 20th century (1914 to the present): World War I, The inter-war period, World War II, Relations with Germany, Rewriting history, Thirty golden years - the economic miracle, Political developments, Switzerland and the worldAnnexes: Timeline, The 26 cantons, Index

Titre
Swiss History in a Nutshell