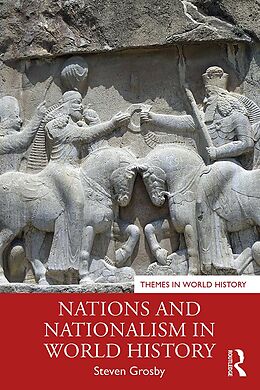 Nations and Nationalism in World History

Nations and Nationalism in World History challenges the commonly accepted understanding of nations as being exclusively modern and European in origin by drawing attention to evidence that indicates that nations are found in antiquity and the Middle Ages, and throughout the world.

Locating the concept of nations at all periods of history and around the world, Steven Grosby discusses a diverse array of manifestations of nations throughout history, drawing upon its complex intersections with religion, ethnicity, law, politics, and warfare. Among the societies discussed throughout the text are ancient Israel, Sasanian Iran, medieval Sri Lanka, Korea, Vietnam, and Scotland. Grosby analyzes how the category nation can be used for historical comparison, indicating both the ways ancient and medieval nations differ from modern nations, and the different relations over time between nation and civilization. This analysis leads students to re-examine the assumptions of the historical periodization of antiquity, the Middle Ages, and modern times. It further distinguishes nation and the patriotic attachment to it from the uncivil ideology of nationalism.

This book will benefit students in world history and political science courses, as well as ethnic studies or peace and conflict studies courses that wish to provide some historical context.

Steven Grosby is Emeritus Professor of Religion at Clemson University, USA. His areas of scholarship include nationality, religion, and social theory.

1. Problems in the Study of the History of Nations and Nations in World History 2. Categories: Nation, National State, Nationalism, Patriotism 3. Nations in Antiquity 4. Nations in the Middle Ages 5. Nations in Modern Times 6. Conclusion: Nations and History: Theoretical Challenges