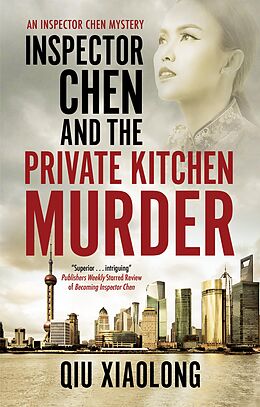 Chen Cao has been removed from his chief inspector role, but that doesn't stop him investigating a 'private kitchen' murder that has similarities to a Judge Dee story.

No longer a chief inspector, Chen Cao finds himself as director of the Shanghai Judicial System Reform Office. To outsiders it's a promotion, but Chen knows he's being removed from the spotlight as he's immediately placed on involuntary 'convalescence leave' to stop him interfering with any cases. However, with various high-profile crimes making headlines and fears escalating over vigilante reprisals, Chen's superiors know he must at least appear active.

One case revolves around Min Lihau, a mingyuan, who runs a 'private kitchen' for powerful figures in Shanghai. Min's accused of murdering her assistant, yet Chen is struck by its similarities to a historic case involving the famous Judge Dee. When an acquaintance of his is murdered in connection with Min, Chen knows he can't stand idly by . . . but he must act in secret, under the cover of writing a Judge Dee novel.

Anthony Award-winning author Qiu Xiaolong was born in Shanghai and moved to Washington University in St Louis, US, to complete a PhD degree in comparative literature. After the Tiananmen tragedy in 1989 he stayed on in St Louis where he still lives with his wife. Qiu's sold over two million copies of his Inspector Chen mysteries worldwide and been published in twenty languages. On top of his fiction, he is a prize-winning writer of poetry. He is Junwu Distinguished Professor at Guangxi University. All the titles in the Inspector Chen series, including Hold Your Breath, China, have been dramatized in BBC Radio 4 productions. The Judge Dee novel that Chen Cao is writing in Inspector Chen and the Private Kitchen Murder will soon by published by Severn House. www.qiuxiaolong.com